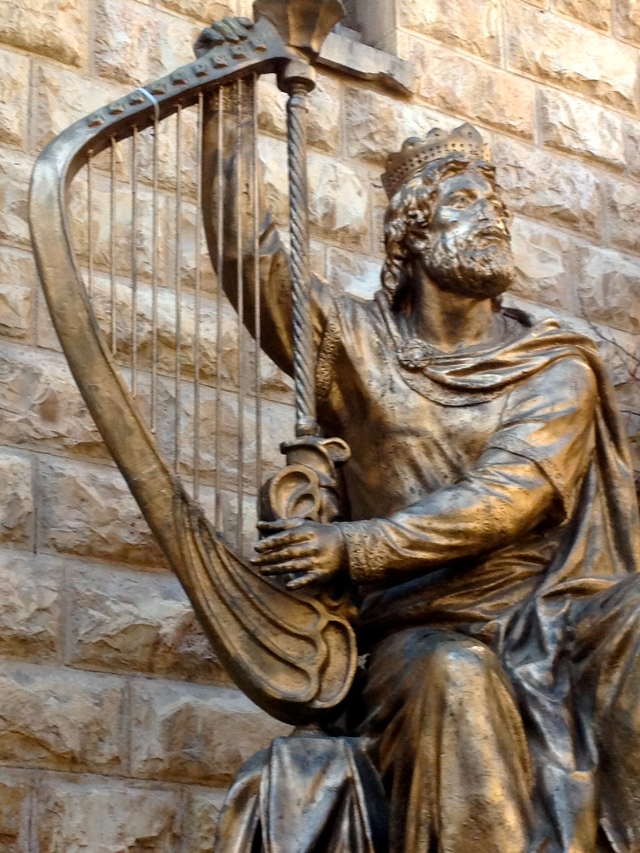 As I dig deeper in the series study of King David by Jimmy Evans, I am intrigued. I have countless books on David and yet Pastor Jimmy shows me a different perspective that I have never thought of before. We all know of David’s great victories, killing lions and bears, killing Goliath, the songs written about David killing ten thousand. He was the mighty warrior. The poet. The warrior that made beautiful  music that  even the demons would flee. We also know of David’s greatest sin of adultery and murder. We know David is called a man after God’s own heart but  have you ever thought of David as the wounded son?

When the prophet Samuel went to Bethlehem to anoint the next king of Israel who is one of Jesses sons,  the elders of the town trembled when they met him and asked if he came in peace? Samuel  got word to Jesse the father of David to bring his family to him. Jesse brought seven of his eight sons with him.  The eldest Eliab was tall and handsome and Samuel thought surely this was the next king but the Lord said, “Do not consider his appearance or his height, for I have rejected him. The Lord does not look at the things people look at. People look at the outward appearance, but the Lord looks at the heart.” The Lord said no this is not the one chosen seven times. Samuel asked Jesse , do you have any more sons? Jesse told him there is still the youngest and he is tending sheep. Of course when David the youngest walked in the Lord said this is the next king and Samuel anointed him in front of all his brothers and the Holy Spirit came upon David that day.

Father hurt or pain is the worst kind of pain to endure. Pastor Evans said of all the counseling sessions he has done in his thirty plus years of ministry, Father pain has always been the worst and the deepest.

Jesse did not think enough of David to have him join the other brothers to meet Samuel.  Talk about feeling like the black sheep of the family.  It does not look like  David had a father that thought that much of him.  We do not know much about Jesse but what we do know and reading in between the lines, David  did not have a great role model as a  father.  Maybe he could have a father figure in his oldest brother Eliab, no again, we are told how Eliab burned with anger against David on the battlefield against Goliath. I am sure it was jealousy and envy there since Eliab was there when Samuel said David would be the next king. Next, David is loyal and serves King Saul, another father figure in his life and Saul is jealous of this faithful servant and tries to kill him on several occasions. David is still so loyal to Saul. He has the chance to easily kill him and chooses not to kill him.  David’s father and each father figure in David’s life rejected him.  David definitely fits  a definition of a  wounded son.

In looking at David in a different light it sure does look like David did not deal with his pain. We all have pain and do we deal with it or do we medicated it?  Do we stay so active and work, work , work to quiet the pain. I call it a Martha spirit. Do we sit and mediate on it and stew on it and make plans to get even? Do we medicate it with drugs, alcohol, pornography, food, accumulating things, sex, etc.  We look at all of these things to be the problem when really the base of the problem is pain. One of the first steps to the Alcoholics Anonymous program is to get honest. Fess up. Alcohol is really not the problem. It is the pain that they are trying to medicate and numb.

David medicated his pain with a  sexual addiction. He had countless wives and concubines. He committed adultery and murder over a sexual act. David would not deal with his pain. He had council and advisors at his beckon call. He had the great counselor of all the Sovereign God but David set with his crown on straight on his throne while his family was melting down around him.  David transferred his pain down to his next generation.

One of his sons, Amnon raped his half sister Tamar. Tamar’s brother was Absalon. David hears what happened and he does NOTHING. Imagine how Tamar felt? The most powerful man in the country and her life is her father and he does nothing to protect her or defend her.  Her brother Absalon demands that the King his father do something about it. Make Amnon marry her which would have been custom to do in that time. Ammon is just following the actions of his Dad. David, acting as king over Israel, used his power as king to obtain Bathsheba so that he could lay with her, even though he knew all along that she belonged to another man. In like manner, Ammon forced himself upon his sister Tamar to lay with her. David had used deception in arranging for Joab to murder Uriah the Hittite, the husband of Bathsheba, and now with the help of his cousin Jonadab and Jonadab’s suggestion to Ammon, Ammon now uses deception to lure Tamar to his bed so that he could lay with her.

Absalon waits for two years and sees that his father does nothing so he took matters into his own hands and killed Amnon.  Absalon flees from David after killing his brother. David eventually summons Absalon back but will not see him. Absalon leads a revolt against his father and his father David had to flee for his life. David left ten concubines to take care of the palace and Absalon had sex with them on the rooftop in the sight of all Israel.  Think of the ridicule that Solomon acquired knowing how his Mother and Father got together. Solomon had over a 1,000 wives when he was king.  Reading all of this it sure does look like the pains/addictions of the father were passed down the the children.

The difficulties that David reaped in his lifetime  are actually just the “natural consequences” of his actions. David’s sons are going to follow the example that their Dad set when he committed adultery and murder, and the result will be great and continual grief in the heart of David.

Having so many wives and sons, plus being a king and a busy warrior all of his life, David was an “absent father”to say the least.  Ammon had grown up without having both the nurturing and affection of a father nor the discipline that only a father can give. David should never have taken all of these wives because in doing so he was an absent father and as a result raised sons who were selfish, self-centered, and were used to getting their own way. Their mother’s probably did  the best they could do teaching them, but there is much to be learned from the role of a Father.

Pastor Evans said a powerful quote that has stayed with me,  “Every great man and woman of God has to rise above the pain of their past to reach their God given destiny.”David excelled in many areas of his life but he failed in the role of a father because he did not deal with his pain of the past in this area.

What do great men  and women of God do with their pain? We have to face it, not run from it, bury it, medicate it or ignore it. FACE IT ! Apostle Paul is a great example. He was the Pharisees of Pharisees and a murderer of countless Christians yet he let his sin and his scars be redeemed. He layed his pain and sins at the foot of the cross.  The blood of Jesus is greater than any sin. With the power of our resurrected Savior, we can face our past or our pain and decide we are the end of the pain and we will not let it transfer to the next generation.  The buck stops here with us ~

David didn’t inquire of the Lord concerning the decisions he made and suffered greatly as a result . We need to learn from David and what he did not do.  Learn to pray about everything before acting, every single decision.

We have to be willing to submit our strongholds to God. We have the power of our resurrected Savior inside of us. We just need to tap into the power that we already possess. John 16: 12-15 tells us ,When the Spirit of truth comes, he will guide you into all the truth; for he will not speak on his own authority, but whatever he hears he will speak, and he will declare to you the things that are to come.  He will glorify me, for he will take what is mine and declare it to you.  All that the Father has is mine; therefore I said that he will take what is mine and declare it to you. Claim it. There is victory in the name of Jesus.  The word of God is living and active and it is our sword for battle. In whatever battle we find ourselves in we must equip ourselves with the scriptures that focuses on that area. Mediate on them. Be able to combat the enemy with it when he arrives with his schemes, his weapons, his condemnation. The battlefield for most of us is in our minds.  We submit ourselves to God , resist the devil and he MUST  flee. It is not he may flee, he could flee, He MUST FLEE ~

As I have said many times David is my favorite person in the Bible.  There are so many lessons to learn from his life. The things he did that were extraordinary and the things he did that were devastating. There is a saying that says never follow a general without scars. Well, this man after God’s own heart had scars and plenty of them. May we learn from the good and bad of his great life. David recovered from his sins and he did many great things in his life. He ended well. May each one of us keep the end in mind because the end is going to come .

I encourage each one of you to open your Bible and read the life of David with fresh eyes. Ask the Holy Spirit to reveal his truth to you.  What are you saying to me ? What life lessons of David can be applied to my life right now? It is so exciting to me to read a story that I have read countless times and see a new revelation.  The Lord is full of countless wonders that he is just waiting to show us if we will only take the time. We are told to study and show ourselves approved.

“Lord Jesus, fill us with a new pouring out of  your Holy Spirit and guide us into your way of truth. Free us  and forgive us all from our past pain, from  errors and false ways and lead us in the knowledge of your ways and your will for our lives. May there be nothing in our life that is not under your guidance, your lordship . Lord, each day MORE of you and LESS of me, I pray. Amen ~